The Power of Brainstorming 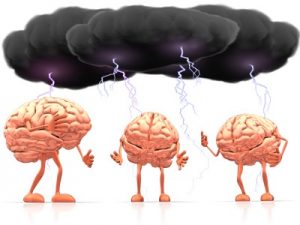 Maybe you can’t come up with a decent story idea. Maybe you’ve no idea of where to take the plot. Or possibly you’re just losing patience with an intractable character.

Whatever it is, you feel as though you’re spinning your wheels. What can you do?

Welcome to the power of brainstorming. (I have no doubt that you have heard of ‘brainstorming’ before – but perhaps you don’t know just how amazing the results can be, or you think it’s not something that you can do on your own!)

Brainstorming is pretty much exactly what it sounds like: you focus on a problem area and jot down ideas at a fast and furious rate (‘storming’ the topic!) until you are overwhelmed with the possibilities. Don’t think too hard; don’t edit, and don’t stop. Usually, brainstorming is accomplished with at least two heads being put together… but with a ‘silent partner’ in the form of the ideas at the end of this article, or by coming up with your own lists, you can do it by yourself.

It helps if you have some guidelines. What follows are suggestions for the brainstorming process in a group situation or by yourself. This is followed by a list of broad areas ready for you to brainstorm and develop.

1. Brainstorming with a group.

You can follow this up by allowing participants to take a day or two to think about it, after which they share any more ideas. The nominated scribe types up all ideas and distributes them.

2. Brainstorming on your own.

When you look at what is written above, you might think that it’s impossible to achieve the same results on your own. Not so! You just need to approach it differently. Here’s how.

Some Useful Directions for Brainstorming

Where does the story start? (What if you started it somewhere else? Where else could it start? Can you move it forward in time? Back in time? Why does it start here? Imagine what would happen if you moved it back two weeks, or forward a year.)

What if you gave your main character a different past? (Can you give them a secret? What is the secret? What would happen if someone found out? What if your character thinks he/she has a past to be proud of, but it turns out they were living a lie? Why would this happen? Where might it lead?)

These are just a few examples. There are no limits to where you can go with the brainstorming process. And if you’re stuck… anything’s worth a try, right?